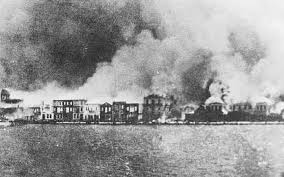 Andrew Brunson, the unjustly imprisoned Presbyterian missionary interviewed by Adam O’Neal (Oct. 5-6, 2019) says, “We went to Turkey because it was the largest unevangelized country in the world.” In the earliest days of Christianity, what is now Turkey was probably the most evangelized country in the world. Muslim persecution of Christians is the reason for the change.
For example, old Antioch (now Antakya) was where “The disciples were first called Christians” (Acts 11:26). The Apostle Paul wrote letters to the Ephesians (Ephesus, near Selçuk), Colossians (Colossus near Honaz), and Galatians (Ankara region). Paul’s birthplace was Tarsus (now Cumhuriyet Alani).
In the Book of Revelation, John is instructed to write to seven churches: Ephesus, Smyrna (now Izmir), Pergamum (Bergama), Thyatira (Akhisar), Sardis (Sart), Philadelphia (Alashehir), and Laodicea (near Denizli).
In 325, Nicaea (Iznik) was the site of the great Council that established “The Nicaean Creed.” The saintly Fourth Century Church Fathers, Gregory of Nazianzus, Gregory of Nyssa and Basil are all associated with Caesarea (Kayseri), a city demolished and the population massacred by the army of the Turk Alp Arslan in 1067.
Constantinople (now Istanbul) was seat of the Eastern Roman Empire from 324 until 1453 when the Ottoman Turks captured it. The city is the site of the Sixth Century Hagia Sophia Church built by the Emperor Justinian. The Hagia Sophia has been a mosque since 1453.
St. Polycarp, a disciple of St. John, was Bishop of Smyrna (Izmir). Another of John’s disciples, St. Ignatius, wrote Epistles to the Christians of Tralles (Aydin), Philadelphia and Smyrna. In 1402, Tamerlane stormed Smyrna and massacred almost all the inhabitants.
And it was in Smyrna, September 13-22, 1922, that Mustafa Kemal’s Turkish troops burned the Greek and Armenian sections of the city, and, according to some estimates, killed or drove into permanent exile about 85,000 or more Christians.
“The largest unevangelized country in the world.” Now you know why.