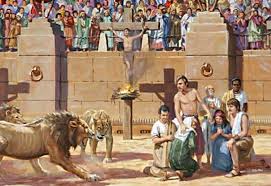 On whom shall I look, but on him that is meek and peaceable, and that trembleth at My words? (Isa. 66:2).

If you wonder why the faith of the earliest Christians is so different from that of many present Church leaders, it is, in large part, due to our seminaries. New students bring a little religion in, graduates take none out, and religion accumulates. This has produced a crop of Church leaders who are naive, cantankerous and see Christian agape as little more than the pursuit of social justice.

Consider for example the N.Y. Times op/ed (6/6/20) in which Marianne Budde, Episcopal Bishop of Washington, D.C, wrote that she was “outraged by President Trump’s use of the Bible and the backdrop of St. John’s Church for his political purposes.” Obviously, Mr. Trump’s visit was not Hollywood slick, but it was not a simple photo op. Holding up the Bible in front of the vandalized church was a symbol: The attack on this Church was an attack on the message and morality of this Bible. But Bishop Budde, along with Presiding Bishop Michael Curry (and CNN’s Anderson Cooper, among others), failed to grasp the symbolism, and they responded in a huff.

St. Paul advised that a bishop should be, among other things, the husband of one wife (which Marianne Budde got backwards), self-controlled, sensible, respectable, hospitable, an able teacher, not a bully but gentle, not quarrelsome. The Bishop quotes Gayle Fisher-Stewart, an African American Episcopal priest who could use a little self-control herself. She barked: “I hope the outrage over the continuing destruction of black lives is as great as the outrage over the president holding a Bible in front of a church.” Fisher-Stewart’s hope was dashed (and backwards also): the outrage over black lives has been enormous and destructive, but Mr. Trump at St. John’s has passed like smoke.

Bishop Budde praises Ms. Fisher-Stewart as one “who refuses to suffer white-supremacist fools gladly.” We expect a bishop to know a something about Christianity, but Bishop Budde calls white-supremacists “fools,” while Jesus himself warns that “whosoever is angry with his brother without a cause shall be in danger of the judgment: and whosoever shall say to his brother, Raca, shall be in danger of the council: but whosoever shall say, Thou fool, shall be in danger of hell fire” (Matt. 5:22). Angry without a cause? Was she sensible, respectable, or hospitable when she pouted on television that the President had not “asked her permission” to speak in front of the church? Should he have asked? Has she complained that the thugs who torched the church did not ask permission?

She says that “Jesus calls his followers to emulate his example of sacrificial love and to build what he called the Kingdom of God on earth.” But Jesus says to Pilate, “My kingdom is not of this world: if my kingdom were of this world, then would my servants fight, that I should not be delivered to the Jews: but now is my kingdom not from hence” (John 18:36). Perhaps her odd understanding here is attributable to her days at seminary where she repeatedly heard about every passage from Genesis to Revelation: “This does not mean what it naively appears to mean. It actually means . . .” – and then the theologian gives his latest interpretation.

As any number of passages from the Early Church Fathers show, a “great gulf” fixed between our new leaders and the Christian Tradition. For example, a contemporary of the Apostles, Bishop Clement of Rome (d. 100), in an epistle to the tumultuous (!) Church in Corinth writes: “Let us then also pray for those who have fallen into any sin, that meekness and humility may be given to them, so that they may submit, not unto us, but to the will of God. For in this way they shall secure a fruitful and perfect remembrance from us, with sympathy for them, both in our prayers to God, and our mention of them to the saints. Let us receive correction, beloved, on account of which no one should feel displeased. Those exhortations by which we admonish one another are both good [in themselves] and highly profitable, for they tend to unite us to the will of God.”

Clement’s attitude is not that that of Bishop Budde who “was horrified to learn that while he [the President] was threatening to use military force across America, peaceful protesters were being forcibly removed from Lafayette square so that he might pose before the church for a photograph.” Was the Bishop equally horrified that Presidents Washington, John Adams, Lincoln, Grant, Eisenhower, and Lyndon Johnson used military force to subdue unruly citizens?

Contrast all this from Bishop Budde with the words of Polycarp, Bishop of Smyrna (Martyred, 155) and, a “hearer of St. John.” In his Epistle to the Philippians he writes: “Stand fast, therefore, in these things, and follow the example of the Lord, being firm and unchangeable in the faith, loving the brotherhood, and being attached to one another, joined together in the truth, exhibiting the meekness of the Lord in your intercourse with one another, and despising no one. When you can do good, defer it not, because ‘[our giving of] alms delivers from death.’ Be all of you subject one to another ‘having your conduct blameless among the Gentiles,’ that ye may both receive praise for your good works, and the Lord may not be blasphemed through you. But woe to him by whom the name of the Lord is blasphemed! Teach, therefore, sobriety to all, and manifest it also in your own conduct.” And, “Pray also for kings, and potentates, and princes, and for those who persecute and hate you, and for the enemies of the cross, that your fruit may be manifest to all.”

Here are the words of Ignatius, second Bishop of Antioch, written to the Christians in Philadelphia while on his way to martyrdom (d. 107) in the Roman arena. Ignatius’ understanding is in tune with the Holy Scriptures but dissonant with such as Bishops Budde and Curry (not to mention Anderson Cooper): “Flee, therefore, the wicked devices and snares of the spirit which now worketh in the children of this world, lest at any time being overcome, ye grow weak in your love. But be ye all joined together with an undivided heart and a willing mind, “being of one accord and of one judgment,” being always of the same opinion about the same things, both when you are at ease and in danger, both in sorrow and in joy. I thank God, through Jesus Christ, that I have a good conscience in respect to you, and that no one has it in his power to boast, either privately or publicly, that I have burdened any one either in much or in little. And I wish for all among whom I have spoken, that they may not possess that for a testimony against them.”