Are You Your Own Golden Calf? 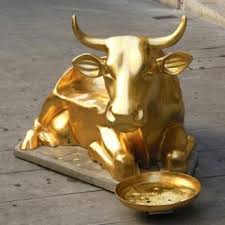 A couple of quotations from the Morning Prayer office for the Eighteenth Sunday after Trinity speak to any number of heresies now raging in various churches, foremost among which are heresies about sex and marriage. These heretical theologies play out in any number of ways. For example, in the scandalous treatment of Episcopal Bishop of Albany William Love regarding his stand against same-sex marriage and in the growing split within Methodism about whether homosexual activity is a sin or not. If the hierarchy of the Episcopal Church and certain Methodist clergy still bother to read Scripture, they apparently no longer believe that passages such as the following, as well as Scripture’s clear pronouncements about sex, mean what they say.
Moses warns the Hebrews, “See, I am setting before you today a blessing and a curse: the blessing, if you obey the commandments of the Lord your God, which I command you today, and the curse, if you do not obey the commandments of the Lord your God, but turn aside from the way that I am commanding you today, to go after other gods that you have not known.” (Deut. 11:26-28 ESV). “Other gods” is, of course, a metaphor for all sorts of idolatry, not simply bowing down to gods of wood or stone, but making one’s primary concern something other than God – usually, and in the present sexual cases, one’s selfish mental and physical pleasures.
Paul similarly warns the Galatians, “I am astonished that you are so quickly deserting him who called you in the grace of Christ and are turning to a different gospel— not that there is another one, but there are some who trouble you and want to distort the gospel of Christ. But even if we or an angel from heaven should preach to you a gospel contrary to the one we preached to you, let him be accursed. As we have said before, so now I say again: If anyone is preaching to you a gospel contrary to the one you received, let him be accursed” (Gal. 1:6-9 ESV).
See at this same blog site, “This Curry is Too Hot” at my blog “A Question about Christian Ethics,” “Transgender-ism, R. I. P.,” and other posts. All with material relating to my 450-page work, “Some Fatherly Advice about Sex: What God the Father and the Early Church Fathers Say.”